A world at your fingertips Have you ever lost yourself in a Wikipedia rabbit hole? Imagine doing that for the Wikipedia of the year 2049. This is Neurocracy, an interactive narrative experience that offers an anthology of compelling sci-fi stories inside and between the hyperlinked articles of an online encyclopedia. It is both a crowdsourced alternate reality game and an epistolary hypertext novel, opening with a high-profile assassination that you must investigate and solve.

A world that builds over time The story of Neurocracy is episodic and unfolds across ten consecutive days in the year 2049. Each episode represents a snapshot of a single day, with new articles uploaded (and existing ones updated) to simulate bouts of frantic editing that reflect the global fallout of the assassination. Each article offers a unique narrative thread to follow, detailing a person, organisation, technology, or event relevant to the story and themes of Neurocracy. You can even click Random article and dive in that way.

A world as realistic as it gets In addition to the sense of realism conferred by the Wikipedia format, Neurocracy uses accurate science and sociopolitics to build the world of 2049. Exploring the fascinating and terrifying car crash of technology and humanity, Neurocracy depicts an all-too-near future where networked brain implants are as commonplace as smartphones and equally suited to mass surveillance. In this neurometric panopticon, your thoughts can betray you, but there are ways around that.

A world coming to your browser 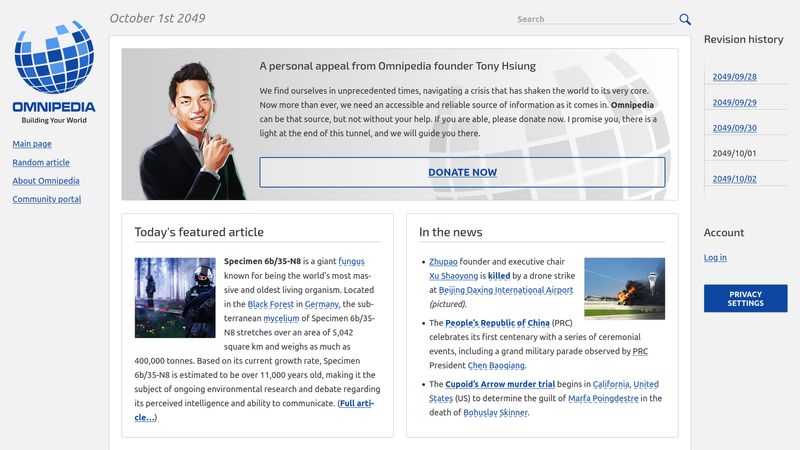 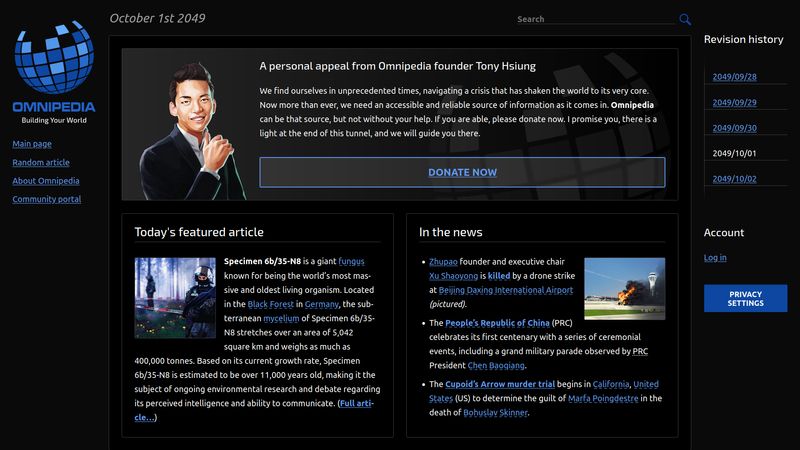 Playing out entirely on a website with no download required, Neurocracy invites you to go it alone or join forces with others to piece together what has happened, and what is happening, in the world of 2049. Using the narrative power of your imagination, chase implications and interpretations by reading between the lines and arranging a story from a deeper pool of potential stories. Find clues, draw connections, compare notes, and ultimately solve a murder.

The world of Neurocracy is explored through Omnipedia, a near-future successor to Wikipedia. The first episode takes place on October 1st 2049 and is available for free, allowing you to get a feel for Omnipedia, how it mirrors Wikipedia in form and function, and the murder mystery that drives Neurocracy’s many storylines.

The remaining nine episodes, each one corresponding to an in-universe day, push the storylines of Neurocracy forward to their revelations on October 10th 2049. To unlock all episodes, you can purchase a Neurocracy Season Pass for a one-time payment of £15.00. This will offer login access that opens up Omnipedia’s Revision history past the first episode.

Neurocracy’s ten episodes were initially released on a weekly basis during the summer of 2021, which enabled a community of players to crowdsource and discuss theories between episodes. These live theories then influenced the writing of each subsequent episode in a dialogue between Neurocracy’s developers and the community, not unlike a tabletop role-playing game.

This interactive element of Neurocracy can be revisited by joining our Discord server, which has episode-specific speculation channels to avoid information from later episodes seeping into earlier discussions. The conversations in those channels can be freely consulted and represent as much a record of Neurocracy’s worldbuilding as Omnipedia does.

In its present state, Neurocracy can be enjoyed in a number of ways. You can go episode by episode and solve the murder mystery, either on your own or with a group of fellow sleuths. You can spark fresh discussions in the Discord, which may influence upcoming content. The world of Neurocracy still holds many questions, marking the final episode no more an ending than it is a beginning.